On December 4, Brooklyn StudioEIS will unveil its most recent creation, a full-figure bronze of President John F. Kennedy at the John F. Kennedy Center for the Performing Arts in Washington, D.C. The sculpture depicting Kennedy smiling and in full-stride stands 81 inches tall and weighs 660 pounds.  The over life-size portrait was commissioned by the Kennedy Center and underwritten by Center Chairperson David M. Rubenstein in honor of its namesake, and is part of the year-long 50th anniversary celebration of the founding of the nation’s performing arts center. The monument will be located outdoors in the lower gardens of the Kennedy Center and the unveiling will occur during the Kennedy Center Honors weekend. The sculpture will be featured on CBS’ Sunday Morning program on December 5. 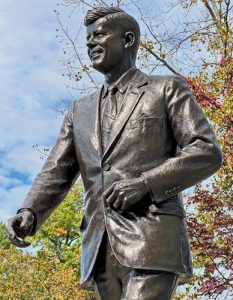