Michigan State University Research Center unveiled Jay Hall Carpenter’s Adulation: The Future of Science. The sculpture pays tribute to the pioneering research of three women, Pearl Kendrick, Grace Eldering and Loney Clinton Gordon. Together, they developed a vaccine for pertussis, commonly known as whooping cough.  The September 27 unveiling was well attended by staff from the MSU Research Center as well as relatives of the researchers and former lab assistants. 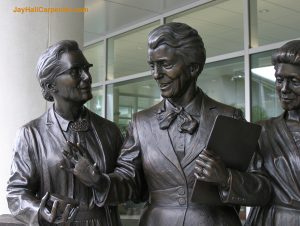 A professional sculptor since 1976, Jay Hall Carpenter earned his reputation during 20 years as sculptor for the Washington National Cathedral. He created the original carver’s models for over 500 sculptures that adorn the gothic, limestone building.  Many American churches have commissioned his work, as have the State Department, the Smithsonian, Canterbury Cathedral, and the New England Medical Center. Other clients include the University of Missouri at St Louis, the State of Maryland and George Lucas. His sculptures are exhibited in premier fine art galleries in the United States and England.