The bronze commemorates the Mexican American children of Alamosa County who were banned from attending the nearest school from home.  In 1912, Hispanic children in Alamosa were forced by the local school board to attend a different school despite being fluent in English. There was a strong separation between “Mexican” and “American” children. When parents tried to enroll them in an English-speaking school, the children were rejected. School officials enforced a policy that children from Spanish-speaking families needed language support. In 1914, Judge Charles Holbrook determined this was a case of social prejudice, recognized the children’s fluency in English and gave them the right to attend any school in the district. 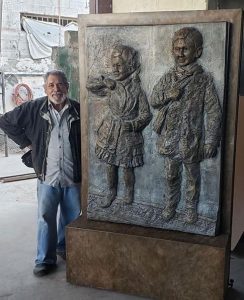