This year, 2020, Zenos Frudakis celebrates the 20th anniversary of his sculpture Freedom.

Freedom, which is located at 16th & Vine in Philadelphia, Pennsylvania, has been a source of inspiration to countless people.  Frudakis wanted to “create a sculpture almost anyone, regardless of their background, could look at and instantly recognize that it is about the idea of struggling to break free. This sculpture is about the struggle for achievement of freedom through the creative process.

Although for me, this feeling sprang from a particular personal situation, I was conscious that it was a universal desire with almost everyone; that need to escape from some situation – be it an internal struggle or an adversarial circumstance, and to be free from it.”

In this time of social distancing, this desire has taken on new significance; people want to break free from the restrictive conditions on gathering and movement. 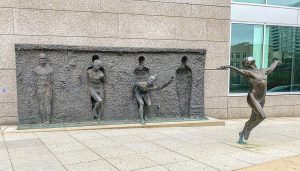 Though the bronze sculpture now stands at a 20’ long x 8’ high, the work began as a small, clay model which Frudakis used to develop its concept and appearance.  Although there are four figures represented, the work really shows one figure moving from left to right. The composition starts with a kind of mummy/death like figure locked into its background. In the second frame, the figure begins to stir and struggle to escape. The third figure has torn itself from the wall and is stepping out, reaching for freedom. In the final frame, the figure is entirely free, completely away from the wall; it is victorious, with its arms outstretched in glory.

For Frudakis, it is important that the public interact with the sculpture, not just intellectually and emotionally, but physically. He created a “stand here” space so that people can insert themselves inside the sculpture and become part of the composition.  The composition also includes many elements besides the figures; viewers who take a closer look have plenty more to experience.  Additional information about Freedom can be found here.