Thomas Jay Warren created the Emancipation and Freedom Monument for Richmond, Virginia. The monument consists of two figures. The man, whose shackles fall from his wrists in this bronze monument, stands 12 feet tall. The woman holds an infant and a document dated January 1, 1863, the date of Abraham Lincoln’s Emancipation Proclamation. Additional portrait reliefs memorialize Virginians who fought against slavery and for equality. 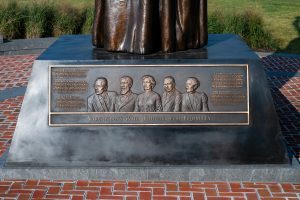 Located downtown on Browns Island, a public event space along the James River, the massive monument has been a decade in the making. Despite a soaking rain, a crowd gathered for the dedication, moved by the feelings expressed by the sculpted figures.