The National Sculpture Society awards the 2022 Dexter Jones Award to Jiannan Wu. The $5,000 award is presented to a sculptor with outstanding work in bas-relief. Sculptors Ben Hammond (from UT), Kirsten Kokkin (from CO) and Dr. Peter Van Alfen, Chief Curator at the American Numismatic Society served as this year’s jurors.

Van Alfen says, “Jiannan Wu’s sculptural work is like nothing else. Dynamic, playful, intricately composed, and brilliantly executed, each piece draws your attention instantly and holds it for long joyful minutes afterwards. Each time you return to the same piece there are new discoveries to be made – and return you do since each one is so compelling.”

Kokkin describes Wu’s work as “untraditional” and “exciting.” She continues with, “The National Sculpture Society has always stood for the highest of standards in figurative sculpture in the world. Therefore, it is a great pleasure to give this prize to Jiannan Wu, who takes these qualities and transfers them into a completely modern image.” Hammond adds that “Wu’s work demonstrates a high level of technical ability along with creativity in subject and composition.”

Jiannan Wu is a member of American Medallic Sculpture Association and World Economic Forum Global Shaper of Dalian Hub. Wu received his BFA degree in sculpture from the China Academy of Art and his MFA degree in sculpture from the New York Academy of Art. He was selected for the Terra Foundation Residency in Giverny, France (2015), the ABC Stone Carrara Merit Award Residency in Italy (2016), and the West Nottingham Academy Eric Fischl ‘66 Artist-in-Residence (2019). His works have also been in exhibitions at renowned venues such as Accesso Gallery in Italy, Gallery Poulsen and Art Herning in Denmark, Art Miami and Southampton Arts Center in the USA, and Chongqing Contemporary Art Museum in China. Wu currently lives and works in the New York City.

The award, first presented in 2001, is named in honor of Dexter Jones (1926-1986), a Fellow of NSS. In addition to being an accomplished sculptor of portraits and works in the round, Jones created several outstanding bas-reliefs in his lifetime. The award was made possible through a generous donation from Dr. Roshen Irani and will be awarded annually in perpetuity. 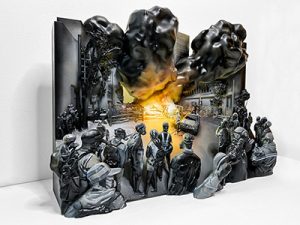